I’m not sure what it is about Christmas that inspires extremes, but there’s definitely something. What other explanation is there for the wonder that is “Grandma Got Run Over by a Reindeer” or the 90’s CBS special Borrowed Hearts or – a concept/product I’ve never fully understood – eggnog? Something about Christmas allows for a certain level of excusable, if not regrettable, extravagancies.

My personal favorite in the genre of Holiday Excess: Christmas Sweaters. I don’t know who made the initial sweater or who first donned one and thought “Hey, this is festive!” but I can only assume that large amounts of eggnog were involved in both cases. I’d really like to hug these people. They’ve given us such a rich tradition of too-good-to-be-true apparel. As was evidenced by a quick search on Google Images. Oh my word.

As I was looking through the pictures I wondered why no one has ever made a list of rules about Christmas sweaters. Really, it would be in everyone’s best interest to have a guide and the list practically makes itself.

So last night, I set out to make such a list.

In the unlikely event that you or someone you know is tempted to express your Christmas cheer in fabric, please refer to these rules when deciding whether or not this is a good idea.

Rule #1: If Santa, Rudolph, Frosty, or any other character’s face takes up more than 50% of the surface area, just say no.

Rule #2: If Santa appears with another fictional character who is not associated with Christmas, just say no. This year, Santa and the Stork decided to join forces.

Rule #6: If there are patterns, sections, or windows, just say no. 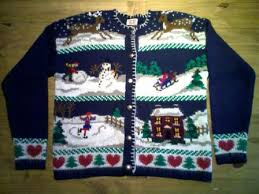 (And while we’re at it, just say no to mullets.)

Rule #7: If it comes in a color Santa can see from the North Pole, just say no.

And finally, Rule #8: If it doubles as an advent calendar, just say no.

Armed with these rules you should be able to navigate any holiday wardrobe crisis that may befall you. But if you’d like to ignore the aforementioned in an effort to make someone’s day, by all means, PLEASE go for it. As long as you stop by my house too.